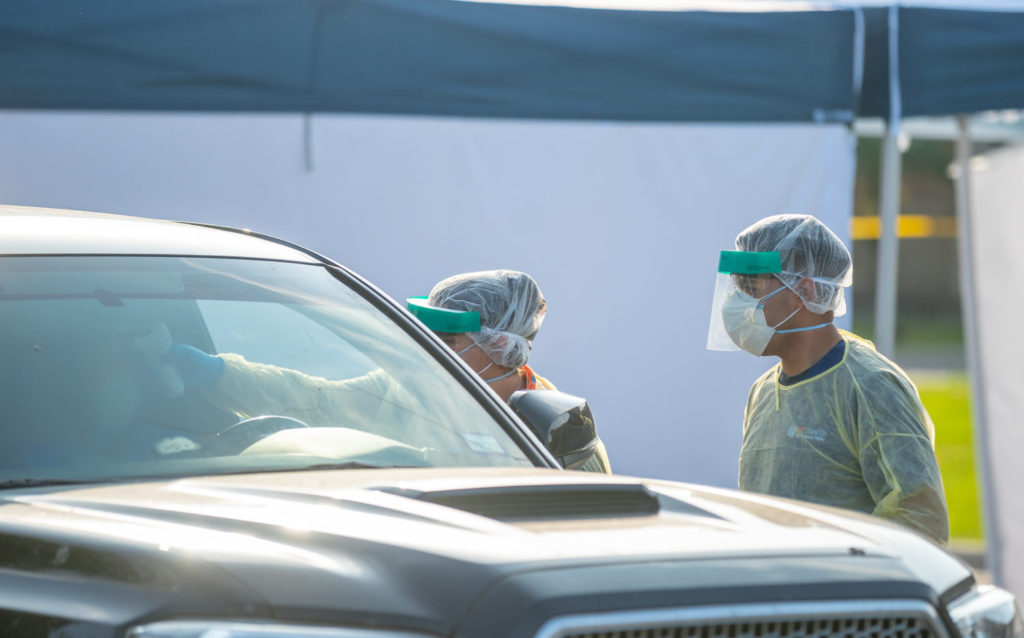 ‘Imagine if you got your parents sick and you’re the reason they’re in the hospital?’

But one UTRGV student admits she didn’t really pay much attention to all the news about COVID-19 – until she got sick in July and tested positive.

Carolina Garza, of Mission, had been to a “hang out” off campus with a couple of friends in mid-June, and later found out she had come into contact there with someone who had COVID-19.

Three days later, the UTRGV junior and mass communication major got a call from her friends, who encouraged her to get tested.

At that point, she wasn’t showing any signs of being ill and thought she was OK. But a day later, she noticed something was “weird.”

“I ate normally that day. Everything was normal, I didn’t have symptoms until later that day. I was drinking my boba (also called bubble tea, made with tapioca), and it was kind of weird. I was drinking it like normal, but then I was like, ‘I can’t taste it,’” she said. “It didn’t taste like anything. I kept on drinking. I rinsed my mouth, I got a mint gum and put it on my tongue. I still couldn’t taste it. I was freaking out.”

That’s when she knew she had to get tested to confirm what she already knew: She had COVID-19.

Garza and her mother arrived at the testing site about 2:30 a.m.; the site would start testing at 8 a.m.

Garza tested positive for coronavirus, while her mother tested negative.

As soon as Garza got home, she went into self-quarantine. She stayed in her room, communicating with her parents via Facetime and her brothers through a closed door.

Garza’s family was familiar with the needed precautions. Her family owns a restaurant.

“After I received my results, both of my parents were tested, and both were negative. But because of the job, my dad comes in contact with a lot of people, so he knew he had to get tested. But it’s been negative,” she said.

Her other family members were tested as well; all were negative for COVID-19.

The family from the start has made it a point to get tested often, she said, because they help at the restaurant and are in contact with people. Keeping everyone safe and healthy is top priority for the household.

Garza knew she would be staying in her room for two weeks while she recovered. She also was balancing two summer classes at the time, so when she got her test results, she reached out to her professors to let them know about her diagnosis.

“I sent them individual emails right after I got the results. I did tell them I had no severe symptoms, but I told them what I was experiencing. I wanted to let them know, in case I was late with any work,” she said. “They told me to stay safe and said if I needed help, to ask. They were very understanding.”

She attended every class online, wasn’t late with any work and turned in all her assignments – even when, for one of the classes, she had to work with a partner to create videos, she said.

“It helped me get my creative side out. I was, ‘OK, what can I record in my room that I can send to someone else that they can edit?’ My partner was very helpful and he understood. He said, ‘You can’t get out of your room, so let’s do this.’ That helped,” she said.

One of those professors was Dr. Kimberly Selber, an associate professor in the Department of Communication and graduate coordinator for the Master of Art in Communication, who was teaching Garza’s multimedia storytelling class.

For the final project for that class, Garza and her partner decided to submit a video about how she had contracted COVID-19.

Selber said the project was a challenge.

“They had to work in teams, yet they couldn’t be together. And she was in quarantine,” she said of Garza. “Through technology, they were able to work together, edit together. They used Zoom to meet to lay out their script. And they did a great job.”

Selber said she recognizes that attending classes online can be difficult for some students, but she was impressed by how Garza put in the effort to go to class, participate and finish the work under challenging circumstances.

“I think one of the messages that came about with Carolina was – here’s somebody who isn’t feeling well but still managed to come to class every week, do all their work and engage in class,” Selber said. “I think her message is, find a way. Students are paying for classes. Work with your professors to make sure you get the education you’re paying for and you deserve.”

Garza said handling her classes online was an adjustment, but in a way, it helped to distract her during quarantine.

Garza is fine now. It has been a few months since she was diagnosed with COVID-19. She did take another test after her two-week quarantine in July, and the results were negative.

Most of her current classes for the fall semester are online, but she does have one that is asynchronous. The class meets via Zoom, she said, and they might meet in person later in the semester.

Overall, UTRGV to date reports 188 cases of campus-related COVID-19, a comparatively low tally the university credits to its stringent on-campus cleaning, working and studying from home to limit contact, and observations of CDC safety guidelines.

As for Garza, the entire experience helped her sharpen her outlook, she said, and she is thankful to her family for helping her through her illness. And she’s grateful she had a personal space in which to recover.

She is more mindful of her outings, now, still concerned with putting her family at risk.

Her family are taking the necessary precautions when they make trips out of the house – wearing masks, keeping the proper distance and washing their hands frequently, she said. They are taking daily vitamins to help boost the immune system.

As for Garza herself, since she’s feeling so much better — she thinks she’ll treat herself to a boba. One she can taste, this time.

The University of Texas Rio Grande Valley (UTRGV) was created by the Texas Legislature in 2013 as the first major public university of the 21st century in Texas. This transformative initiative provided the opportunity to expand educational opportunities in the Rio Grande Valley, including a new School of Medicine, and made it possible for residents of the region to benefit from the Permanent University Fund – a public endowment contributing support to the University of Texas System and other institutions.

UTRGV has campuses and off-campus research and teaching sites throughout the Rio Grande Valley including in Boca Chica Beach, Brownsville (formerly The University of Texas at Brownsville campus), Edinburg (formerly The University of Texas-Pan American campus), Harlingen, McAllen, Port Isabel, Rio Grande City, and South Padre Island. UTRGV, a comprehensive academic institution, enrolled its first class in the fall of 2015, and the School of Medicine welcomed its first class in the summer of 2016.