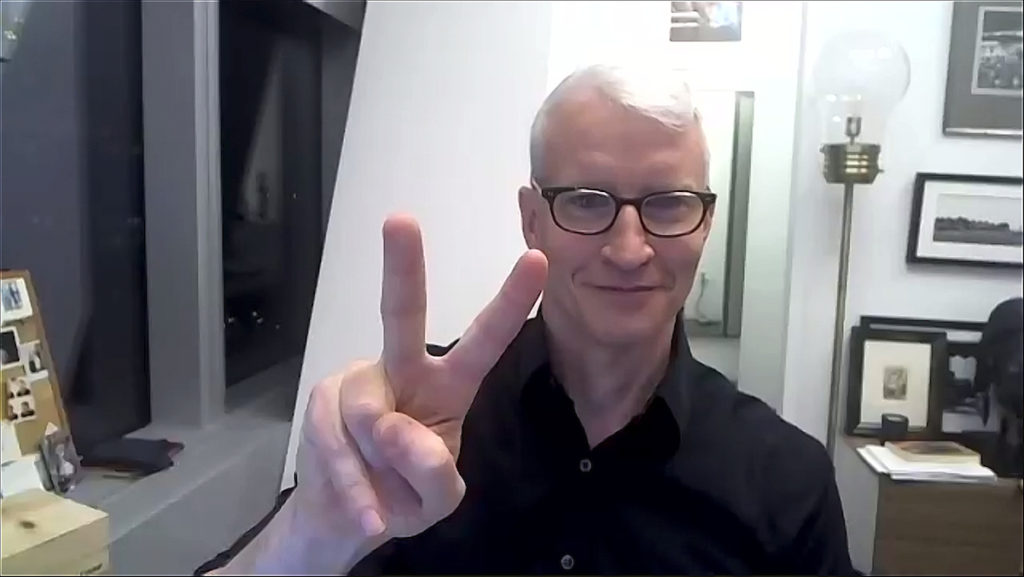 Cooper, who spoke to the audience from his CNN office in New York City, was the second speaker of the Fall 2020 semester for the popular series, now in its 17th season. Free to UTRGV students, staff and faculty, the series has gone to a virtual format because of the COVID-19 pandemic.

Right off the bat, moderator and communications associate professor Dr. Aje-Ori Agbese asked Cooper, host of Anderson Cooper 360, what it was like covering the tumultuous 2020 election while the country was in the midst of a pandemic.

Cooper said COVID-19 made this election one for the history books, as we saw the current president contract COVID-19, heard his allegations of widespread voter fraud, and watched as he refused to concede. Coupled with having to follow COVID-19 guidelines during rallies, he said, all made for one interesting time in America.

“The Trump Administration’s time in office has been unlike any other president in modern day history,” he said “And, for better or worse, depending on how one sees it, this was an election none of us has ever seen.”

As a journalist, Cooper said the past four years have been a challenge, given that the President of the United States called out Cooper and his colleagues as “enemies of the state” – a very dangerous thing to say, he said.

The 28-year veteran journalist, a political science major who loved military history, gave the UTRGV community a glimpse into how he got his start in the news business. It all started with a fake press pass made by his friend, a borrowed video camera, and travel overseas to cover active wars on his own.

He traveled for three years, including to hotspots like Rwanda, Vietnam, Somalia and Sarajevo, and admits he was lucky to not get killed. He did, however, manage to get his first gig with ABC News.

“I thought if I went to places that were really dangerous that other people weren’t going to, then I could probably find some incredible stories. And, it would be something that I was personally interested in,” he said. “I wanted to see how people survive in different situations and learn from them on how to survive.”

Of course, he laughed when he told students it probably was not a good idea and encouraged them to not follow his footsteps as far as getting a fake press pass and traveling to war-torn countries.

He did, however, encourage UTRGV students to carve out their own paths and opportunities in life.

As for future journalists, Cooper said, whether you are going into print or television, nobody knows the future of journalism. But it is important to know your voice as a writer, and to be well-rounded in skills that involve editing and shooting video, he said.

He also encouraged budding journalists to volunteer for the assignments nobody wants, and to take those weekend assignments.

“So much of life is just showing up,” he said. “You just got to keep at it. Wherever you end up,  you have to make yourself indispensable.”

The Distinguished Speaker Series is a signature program under the leadership of Student Activities, that aims to provide the university and surrounding community with world-class speakers and lecturers.

The next DSS speaker will be Feb. 8, 2021, and will feature actor, artist and activist Terry Crews, best known for his roles in the comedy series’ Brooklyn Nine-Nine and Everybody Hates Chris.

The University of Texas Rio Grande Valley (UTRGV) was created by the Texas Legislature in 2013 as the first major public university of the 21st century in Texas. This transformative initiative provided the opportunity to expand educational opportunities in the Rio Grande Valley, including a new School of Medicine, and made it possible for residents of the region to benefit from the Permanent University Fund – a public endowment contributing support to the University of Texas System and other institutions.

UTRGV has campuses and off-campus research and teaching sites throughout the Rio Grande Valley including in Boca Chica Beach, Brownsville (formerly The University of Texas at Brownsville campus), Edinburg (formerly The University of Texas-Pan American campus), Harlingen, McAllen, Port Isabel, Rio Grande City, and South Padre Island. UTRGV, a comprehensive academic institution, enrolled its first class in the fall of 2015, and the School of Medicine welcomed its first class in the summer of 2016.